One of the things I really enjoy about Cine Las Americas is that before most of the feature films, they screen a short film. With other film festivals, shorts usually get their own showcases, but for me, this presents other screenings to squeeze into my already chaotic schedule. If it were not for this brilliant way to screen shorts, I would not have seen some of these entries, and every year most of the entries deserve audience attention.

I have to hand it to Jean Lauer and her programming staff for making some excellent pairings on the schedule. Several of the shorts fit so well with the feature that followed. Here are my reviews of the short films I viewed at this year’s festival.

This short from Puerto Rico which appropriately played before Sex, Love & Salsa tells an amusing and compelling story of  Juan (Braulio Castillo), an old Puerto Rican farmer who has a fateful meeting with Keila (Paola Valiente), a beautiful young lady who turns out to be the granddaughter of a former love. For one night, Juan has the chance to revisit fond memories and faces a similar experience from his past.  Written and directed by Adrian Schwartz, Juan Night Stand not only has a clever name, but cleverly, simultaneously tells a children’s parable that symbolizes the characters and their actions. Schwartz’s film almost wickedly and hilariously lampoons romance and its usual trappings and makes a convincing case for his message. Still, his message may not sit too well with those quite fond of romance and the often overindulgent splendor that often comes with it. Schwartz keeps it real and does it quite frankly. 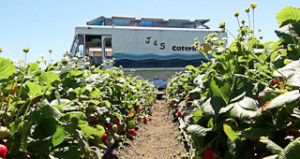 Directed by Claire Weissbluth, this documentary tells two stories of two very different taco trucks. One truck belongs to a Salvadoran family, who keeps their menu simple, traditional and affordable for the immigrant workers they serve. The other belongs to a Mexican-American young man who has a gourmet menu and loves experimenting with new flavors and recipes. His clientele consists of techies working in Silicon Valley. Regardless of whom they serve and the type of menus they offer, the people behind these food trucks put a lot of hard work and passion into what they do and often face the financial challenges that come with running this type of business.  Weissbluth’s documentary is an impressive and intelligent film that shows she has a passion and love for her craft and art, much like her subjects here. Never overly political or preachy in its delivery Lonche is a loving portrait of people who simply want to work hard at doing something they love.  It also serves as an astute look at the different kinds of people pursuing their version of the American dream.

The Orphan and the Bear

From Canada, this gorgeous and engrossing animated film celebrates and honors the Inuit tradition of stories involving animals who can speak and morph into humans and other creatures. A wise polar bear elder adopts an abandoned Inuit child and practically raises him as his own. The bear teaches the child valuable survival lessons and also teaches him how to defend himself. Directed by Neil Christopher, The Orphan and the Bear plays out like a modern day Jungle Book, but without the political and English Colonial overtones that Kipling’s stories have. Christopher’s film is a lovely film adaptation of traditional Inuit legends and myths and one that people rarely get to enjoy. 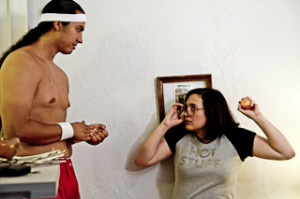 I’m probably not the exact target demographic for this short. With some jokes and references aimed at Native American audiences, this comedy does offer enough universal appeal for other cultures, nevertheless. Still, those not familiar with certain traditions, practices, slang and Native American celebrities will miss some of the humor.  The story involves a young lady named Thelma (Lily Gladstone) who always willingly cares for the children of her friends and relatives, but cannot have any of her own. When she asks The Creator (Tatanka Means) why she is cursed, he arrives to answer her weighty question.

Directed by Ken White and Gyassi Ross, Universal V.I.P. is a sweet and adorable comedy about one’s purpose and place in the world.  I could easily criticize some of the humor, but that wouldn’t be completely fair, because I’m sure Native American audiences will get and appreciate the humor more than I could.  The acting in the film is a bit rough, but not too bad that it takes too much away from the enjoyment of the short.

While on an already awkward and uncomfortable road trip, Lorenzo (Jaime Camil) and Paula (Camilla Belle) share a tragic and dramatic experience that calls into question the road in life they are taking. The tragedy brings to light the real people they are.  Written by Guillermo Arriaga and directed by Dan Carrillo Levy, Zero Hour is a jaw-dropper of a short film that shows a horrible, but real facet of humanity. Both Camil and Belle offer strong and powerful performances. This is one enthralling piece that will have people talking.

One might state that all zombie movies are the same, and though they all share much in common, that is not a completely fair assessment. As for this short from Colombia, the actual zombie aspect of the film plays out similarly to other zombie incarnations; however, writer/director Alexander Quesada has put a witty and inventive spin on the cause of the eventual zombie holocaust. The story involves a small Colombian town during the mayor’s reelection campaign and how the politically motivated actions of the mayor lead to the eventual zombie downfall of the community and later, the world.

Quesada’s intelligent script really drives this short. His satire of Latin American politics make this a more interesting film than some of the feature films which have portrayed zombie holocaust stories. The acting and scenarios can be a little cheesy and corny at times, but the buildup of the holocaust’s backstory makes this an engaging piece.