As I am writing this piece, it is Monday and Fantastic Fest has just passed the halfway point of the festival.  Many movies have been seen by myself and many others.  People are functioning daily with caffeine and perhaps alcohol in their systems.  As I look upon the masses of Festers who have gathered at the Alamo South Lamar this year for movies, parties, and revelry, I see most people smiling, laughing, hugging and just having a damn good time.  For me attending this festival hardly feels like work, save for the moments where I have to focus on a computer screen or jotting words, sentences, and questions in my notebook.  Fantastic Fest equals having a damn good time for movie fanatics. Hopefully this, my second year, will be part of a long tradition for the rest of my remaining years.

So far this year, I have watched sixteen films, attended an art gallery opening, conducted three interviews, and poked my head into a few parties.  So, before I return to my day job and spend a little less time at the festival, I thought I would bring my readers up to speed on what has happened so far. I will begin with my top five list of films I have seen so far followed by some key events and experiences I enjoyed so far.

1. The Invitation: (A haunted man attends a dinner party at the house he once called home and is gripped with paranoia that his ex-wife and her new husband are harboring an insidious agenda.) I saw this film at SXSW this year and had to see it again.  It still holds up well, and in my opinion is my favorite movie so far.

2. La Granja: (The lives of a midwife, a young boxer, a mute child and a young couple collide unexpectedly in a story about the desperate pursuit of happiness on the streets of Puerto Rico.) Director Angel Soto’s feature debut is a powerful and disturbing portrait of the dark side of life in Puerto Rico.

3. Hard To Get: (Supremely confident ladies man TK may have bitten off more than he can chew when he sets his sights on Skiets, a township beauty with an edge who sets the pair off on a non-stop rollercoaster ride through the local underworld.) South Africa has produced another talented filmmaker in Zee Ntuli.  This electrifying and incendiary debut indicates a promising future for the young auteur.

4. Zoom: (Three very different people — an aspiring comic book artist with body image issues, an action director trying to make a more meaningful film, and a model struggling with her first novel — find their stories intersect in earth-shaking ways.) This wild and hilarious film by Pedro Morelli puts an inventive twist on films with intersecting stories.

5. The Missing Girl: (Mort, a lonely and disillusioned owner of a comic book shop, has fallen for his new employee Ellen, a smart, aspiring graphic novelist. But a dark past and a missing girl will complicate their story more than anyone can imagine.) Fans of comic book-based stories like Ghost World and American Splendor will certainly appreciate a film like A.D. Calvo’s The Missing Girl.  The characters may seem like ordinary, average people, but the relevance of their lives and problems make them fascinating and compelling.

I will have more detailed reviews of these and other films coming soon.  Film fans attending the fest will enjoy seeing filmmakers, actors, and other talent up close and personal at the Alamo Drafthouse or the adjacent Highball.  Most of them are quite gracious and willing to meet briefly and pose for photos.  I ran into actors Stephen Lang and Cody Hackman of the film Gridlocked after their screening and they kindly posed on the red carpet for me. 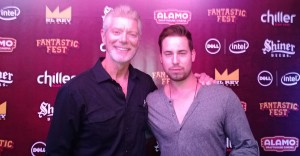 This year, in addition to the movies I’ve watched, I also had the honor and pleasure of attending a press mixer previewing an exhibit at Mondo Gallery that is being held in conjunction with the release of a coffee table book by director Nicholas Winding Refn. The Act of Seeing features movie posters from several eras of exploitation cinema. It truly is a remarkable collection and the Mondo gallery featured a few of these. 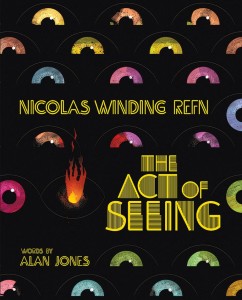 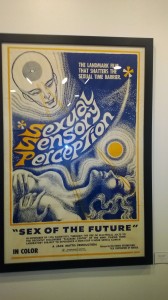 When festers aren’t watching movies or attending special film related events, they are partying. I attended the opening night party which had a wicked twist on Christmas Holiday parties. People wore funny costumes and picture taking with Santa and his elves were available.

It was a fun and wild time fitting for the Fantastic Fest crowd with some of the attendees wearing crazy costumes, including a giant gingerbread man and someone dressed up as giant frog who proceeded to play a video game at the Fantastic Fest Arcade. 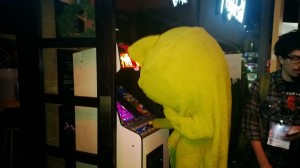 I could honestly gush on and on about the great time I am having here at Fantastic Fest 2015, but I must return to watching movies, enjoying the madness, but on a smaller scale since I must return to the day job.  As I previously stated, I will be posting more detailed reviews of the films I saw along with interviews with some of the talent who attended. So until then, let the chaos reign!