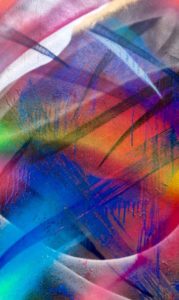 The Emma S. Barrientos Mexican American Cultural Center (ESB-MACC) is presenting selected works by Nathan “Sloke One” Nordstrom in the exhibit titles, “Another Side”, that spans his 27 years as an artist. The exhibit will focus on Sloke’s abstract and graffiti art on canvas alongside photographs of his work and the United States and abroad. The exhibit is in the main Sam Z. Coronado Gallery located on the second floor and begins Saturday, February 4th and will run through March 25.

The opening reception is February 4th from 6-8pm. Food and refreshments will be provided, along with live music by DJ Orion and DJ Chorizo Funk. It is free and open to the public.

About Nathan “Sloke One” Nordstrom:

Raised in and currently residing in Austin, Nathan Nordstrom, a.k.a. Sloke One, is an artist and muralist with over two decades of experience. He began painting after meeting the late Al “Skam” Martinez, an Austin muralist from the 1980s- 1990s that Nathan admires and respects for his mentor’s guidance. He also was influenced by his late father who was also an artist.

As of the last few years, his work has evolved into abstracts and other works. His current works include commercial art projects and private commissions. He has produced works for the Austin Museum of Art, Gallery Lombardi, and an artistic piece for World Stroke Awareness Day, a project for a partnership between Seton and the American Heart Association, among others.

Nordstrom was also a featured artist representing Austin in the documentary, “Bomb It 2” (2010). “The filmmakers went around the world – I represented Austin – and it was a big honor.”

He regularly tours Texas, the United States, and Europe.

Nordstrom is a curator of art gallery shows since 2005, among them, “Pieced Together”; the “Balcones Burner Bash” and “Emerge, the Austin Annual Graffiti Art Show,” that began in 2009 with volunteers and the all volunteer run production continues yearly.

The artist has taught art classes at the City of Austin’s Dougherty Arts Center and the ESB – MACC, something that he finds important as a way “to give back and help mentor.” 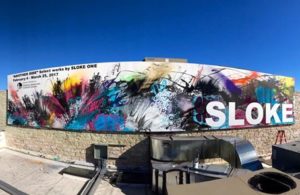 For more information, visit http://slokeone.com/ and more art is on his Facebook page, SLOKE ONE.

The cultural center is located at 600 River St. along the banks of Lady Bird Lake. For more information about the venue, visit maccaustin.org.