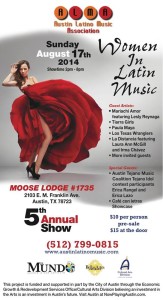 The Women in Latin Music showcase is hosted by the Austin Latino Music Association (ALMA) and returns for the 5th annual celebration on August 17th, 2014 at the Moose Lodge #1735. The showcase features diverse musical genres and artists by established women musicians, and it provides a setting for young emerging artists to display their talents. New artists are to perform and one from the inaugural showcase.

ALMA is proud to present gifted music artists that will perform lovely and powerful music, both in English and Spanish. Featured artists include Mariachi Amor, featuring Lesly Reynaga; recording artist, Paula Maya; the 18U group garnering attention, The Tiarra Girls; Tejano/Conjunto/Country award winning artists, Los Texas Wranglers, featuring Nikki Lopez, Joyce Adams and Rocio Valdes; and Tejano group, La Distancia. Among the special guests invited to perform are contestantsthat have auditioned for the 2014 Austin Tejano Music Coalition (ATMC)’s Tejano Idol vocal competition, performing music from this genre that has been around for decades and is being continued by some very young artists. This year is a new collaboration with Alianza Cultural Latinoamericana, featuring a segment from their Café con letras show.

“This celebration is simply to promote, showcase and demonstrate our appreciation of the local women artists in the music industry. They are multi-talented in their contributions to the vibrant music scene Austin is well known for internationally,” said Liz López, ALMA Board Member and Chair/founder of the Women in Latin Music showcase for the organization. Women of all ages are making a breakthrough in music as Austin’s population continues to reflect increased cultural diversity. Fans of Texas music and artists that entertain with unique styles will gather in support of Austin based women in the music industry. This showcase draws fans from the Austin area, as well as from other parts of Texas.

Paula Maya – She is a full time musician and recording artist with http://yellowhouserecords.com/

La Distancia band, featuring Laura Ann McGill and Irma Chavez (bass player), has been performing and recording for several years, writing original songs. The CD ‘Kumbavasion’ was created under the label Gootz Records. The band is back in the studio recording the next CD to be released soon.

ALMA, meaning “soul” in Spanish, is a non-profit organization founded in 2001 whose mission is to increase knowledge and awareness about the contributions of Latino music and musicians to the local music scene and to provide exposure and resources to local musicians. In addition to Women in Latin Music, ALMA’s signature programs include Sonidos del Barrio (e.g. Sounds of the Barrio) started in 2001, Latino Music Month started in 2006, Santana-rama in 2007 and Viva Jose Alfredo Jimenez started in 2008. ALMA has also collaborated with the Pachanga Latin Music Festivals, as the bookend to Latino Music Month in 2008/2009. Thank you to our sponsors Texas Gas Service, City of Austin, and  to the many individuals and business for their in-kind support. For more information about ALMA, visit www.austinlatinomusic.com.