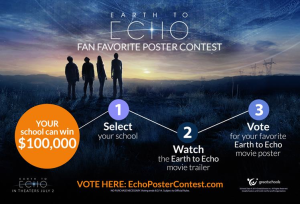 RELATIVITY CELEBRATES NATIONAL TEACHERS DAY AND ITS JULY 2 RELEASE ‘EARTH TO ECHO’ BY GIVING SCHOOLS THE OPPORTUNITY TO WIN $100,000

On behalf of Relativity Media, we are pleased to announce the celebration of National Teacher’s Day in partnership with the July release of EARTH TO ECHO by giving schools the opportunity to win $100,000. We encourage people to participate by voting in the fan favorite poster contest, which begins on May 5th.  To vote and for the chance to win for your school log onto www.echopostercontest.com. Each voter will be able to credit their vote to their school and the school that has the most votes will win the $100,000 prize.
Show your school spirit, celebrate your teachers and prepare for an epic sci-fi adventure with your friends and family when EARTH TO ECHO opens in theaters nationwide on July 2nd, 2014!
EARTH TO ECHO
———————-
Release: July 2, 2014
Director: Dave Green
Screenplay by: Henry Gayden
Based on a story by: Henry Gayden & Andrew Panay
Cast: Teo Halm, Brian “Astro” Bradley, Reese Hartwig and Ella Linnea Wahlestedt
Producers: Andrew Panay, Ryan Kavanaugh
Executive Producers: Tucker Tooley, Ron Burkle, Jason Colbeck, Mark B. Johnson
Synopsis:
Tuck, Munch and Alex are a closely bonded trio of inseparable friends, but their time together is coming to an end. Their neighborhood is being destroyed by a highway construction project that is forcing their families to move away. But just two days before they must part ways, the boys find a cryptic signal has infected their phones. Convinced something bigger is going on and looking for one final adventure together, they set off to trace the messages to their source and discover something beyond their wildest imaginations: hiding in the darkness is a mysterious being, stranded on Earth, and wanted by the government. This launches the boys on an epic journey full of danger and wonder, one that will test the limits of their friendship and change all of their lives forever.
TVR’s fearless leader Laurie Coker would love for her beloved readers to vote for Westwood High School where she teaches, but if you have kids or loved ones in a different school, you may vote for their school in the link above.
Press release provided by Relativity Media and Moroch.