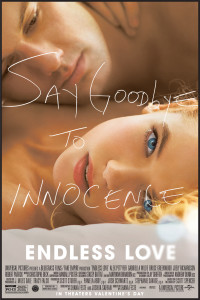 To enter for a chance to win a pass good for two, send an e-mail to trueviewreviews2@gmail.com and put ENDLESS LOVE in the Subject line.  NO PURCHASE NECESSARY. Winners selected via random drawing and notified no later than Monday, February 10, 2014.  One entry per person. Must be 18 years or older to enter.