Geremy Jasper, a singer/songwriter from New Jersey, wrote the screenplay and directed the film about Patricia Dombrowski (Danielle Macdonald) and her dreams of becoming an established Hip Hop artist. He shot the music video “Selena Gomez & the Scene: Love You Like a Love Song” for the single from her third album, “When The Sun Goes Down” and started to write a feature film. Jasper’s debut, “Patti Cake$,” was at this year’s Sundance Film Festival, followed by screening in the 24 BEATS PER SECOND category of the South by Southwest (SXSW) Film Festival. Now that the film will be released theatrically, the filmmaker and cast member, Bridget Everett, came to Austin this week to talk about the film.

SYNOPSIS: “PATTI CAKE$” introduces Australian native Danielle Macdonald in a breakout role, as aspiring rapper Patricia Dombrowski, a.k.a. “Killa P,” a.k.a. “Patti Cake$.”  Fighting an unlikely quest for glory in her downtrodden hometown in Jersey where her life is falling apart, Patti tries to reach the big time in the hip hop scene with original and affecting music.  Cheered on by her grandmother (Cathy Moriarty) and only friends, Jheri (Siddharth Dhananjay) and Basterd (Mamoudou Athie), Patti also shoulders her mother’s (Bridget Everett) heartaches and misfortunes. (Fox Searchlight)

Geremy Jasper is not a first time visitor to Texas, or to Austin, as he and his band performed at the SXSW Music Festival a few times in the past. He is also a songwriter and wrote the music for Macdonald to perform in the film. We began to discuss his exposure to Hip Hop music as a youth.

Geremy stated that he heard it on the radio when he was nine years old, as his brother tuned the radio in to Hip Hop music on the boom box. “He called me in and my life changed. It was incredible.” He added, “It was love at first sound” after hearing Run DMC and others. “I felt like I was falling in love with art.” Later, he found ways to access music tapes of Sam Goody and other artists. “It’s a different time now – you can go download it. Back in the day, it was hard to get your hands on it. Hearing music was a quest” and so was finding people with musical instruments, etc.

Since we are in the age of more technology, this might be educational for a generation not aware of this history. “Yes! Technology does not play a huge role in the film.” He said he used CDR and bulky computers. “It is not cinematic to record on a lap top. I tried to keep it out – to make it more tactile.”

The filmmaker cited the biggest challenge in the production was the writing of the film. He stated it was a long process that began about 2012. “It was my first time to write a screenplay. I learned from researching screenplays I loved. It was a multi – year process with about 9-10 drafts; rewriting, tweaking and adjusting it. He gives thanks to Michael Gottwald (producer) who was “my right hand man” during the writing process as he was able to share it with him and he helped push through even when some writers block was sinking in.

After several years of creating the film and now approaching theatrical release, I asked him to describe being at this point with his film. “It is a dream come true. Never expected it! My dream was to have the ‘Patti’ and ‘Barbs’ see themselves. It is truly surreal and amazing to me.” 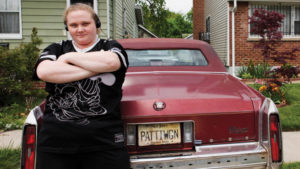 Also on the press tour for “PATTI CAKE$” was Bridget Everett, well known for her film and television performances in “Trainwreck,” as well as “Inside Amy Schumer,” “Girls” and “2 Broke Girls.”

We began by talking about her experience with the film. “I have never done drama before” and she described it as a cool challenge. She said this is the first time that she experienced acting in a film and followed it on to Sundance (and other film festivals).”Participating from the ground up and sticking with it the whole way through” is not usual for her. “It is a thrill; a great ride.” Now that the film is about to have the theatrical release, she stated she feels “Super lucky! We made a small film and didn’t know how many people will actually see it. Then, we got to travel all over and realized it is not a dream.”

As this is her first dramatic role, we talked about her preparation. “I normally do comedy and doing this takes a different set of muscles.” She added that Geremy and Danielle were essential to her work. Her response was very different when we talked about singing. “It’s the best! I was a karaoke regular in the 90s. This was like an ‘Oprah on top of the couch moment’ and I felt the most secure, oddly enough – the safest.” Now that she has done this dramatic role, she said she is ready to do more.

I stated there are plenty of scenes where people will be able to identify with the characters and she agreed. She added that this is about “young dreamers – and one that pushed it!” and will be a film that will appeal to a large audience. “She is a big girl, with a big mouth, heart, fire and hustle who chases her dream.” When she described Patti, I recalled there are several reports (some by the CDC) that there are many plus – size women (over half in the U. S.). Now many women who see the film will find it has actors who may look like them. She stated, “Cool – I see it as a positive.” (Plus – size women) are often seen “as the fat, funny friend,” adding “here, they are women just being women, not the punch line.”

One challenge for her she describes as “being open in a different kind of way.” She added, “I was wondering if I would be embarrassed to show this side of myself,” and had qualms about “letting go.” Ultimately when she did, she described it as when “standing at the end of a high dive – then let go. It is a feeling of euphoria.” In describing her “take away” from this production, she stated, “The reward is in the risk.”