Filmmaker Leigh Whannell (D: “Insidious: Chapter 3” and writer/actor of the “Saw” and “Insidious” franchises) wrote and directed “Upgrade” and made the World Premiere at the SXSW Film Festival this past March. The Alamo Drafthouse Ritz Theater was packed to the gills and audience members cheered at the end both for the film and when the filmmaker took the stage for the Q&A. By the end of the SXSW week of films, “Upgrade” became the Audience Award Winner in the “MIDNIGHTERS” category.

Whannel’s script is set in the not too distant future with plenty of technology, but yet not a happy and ideal life for all who inhabit the planet. The story with shades and influences of sci-fi films from the past decades (“The Terminator” or “Robocop”) certainly has its share of action, humor and is generous on the horror as this writer is well known for. Although some of the past films may have been an influence for the writer, the film does not come across as a remake, nor a rehash, with the mix of humans and what is being created for them (if not already available).

The fight sequences are a highlight as created by the fight choreographer Chris Weir and performance by Logan Marshall-Green (“The Invitation”) who plays the lead character, Grey Trace. The actor shines in the scenes when he has become a quadriplegic and then after new technology allows him to become mobile again, far beyond his expectations. There are some humorous scenes after the tech “takeover.” But Logan Marshall-Green is also fantastic in his performance when he is intense and driven emotionally throughout the film after suffering a loss and not forgetting what he wants revenge for.

Despite the violence and horror, “Upgrade” has its comedic moments when the human body and the technology, known as STEM (voiced by Simon Maiden), become a duo as they research more about the criminals wreaking havoc in the city. It is not a “good guy/bad guy” team, but one certainly reminds the other about their capabilities.

In Whannel’s story, Grey Trace (Marshall-Green), is an automobile mechanic who loves things from the past and is married to Asha (Melanie Vallejo), employed by a high-tech firm and their home has state-of-the-art technology. Opposites attract? Trace has a private client, Eron (Harrison Gilbertson), who lives in a high tech home underground, one that reflects the extreme wealth he has as a tech entrepreneur. His newest, game changing item is the computer chip, STEM.

After Trace and STEM are linked, he has to keep it secret and most curious is a female detective investigating a case, Officer Cortez (Betty Gabriel-she is great and keep an eye out for her again). It becomes harder and harder for Trace to keep his newfound capacity under wraps while also trying to track down a villainous gang led by Fisk (Benedict Hardie), who he discovers have their own technological advantages.

The film will now open on Friday, June 1st and is rated R. Check local listings for Thursday screenings. 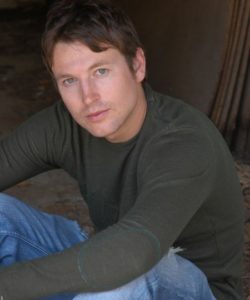 I had the opportunity to talk to writer/director Leigh Whannell during a recent press tour in Austin.

Q –Tell me how you feel about your film winning the Audience Award at SXSW?

LW- It is such a good feeling! I found out on Twitter! It is an extremely good feeling to connect with the audience and have them respond positively to your film. This is a type of “stamp of approval.”

Q – Can you describe a challenge in the making of the film?

LW – Definitely one: trying to create a big world with a lower budget. The set – making Eron’s house (the house of the future) in a small stage; but slowly in post production, we used different tools to expand and make it more tech – big – and have it feel bigger than it is.

Q- If you would have changed anything, what would it be?

LW – No, nothing is lacking. I envisioned the script on screen and am happy where it landed.

Q – Can you talk about casting of the actors?

LW- The film was operating on a budget; so there is no money for a movie star and not seeking one. It was cast organically. From auditions, I remembered Logan Marshall-Green from “The Invitation” (2015). He was the “perfect choice.”

Q – From your work in past movies and current: are you more happy doing this now?

LW – Before, I was writing and happy. With “Saw” – yes, I had fun! I like directing and seeing the film through – go as far as I can take it. I want to do original films (and not planning on going to Marvel),     where the trailer can stop people in their tracks.

LW – Yes, some favorites of mine are “The Thing” and “The Fly.” Write a good story!

Q – What do you want to say to the public about your film?

LW – “Upgrade” will be opening in the US this summer on June 1st. Take a chance to go see it! It will be there (competing to be seen) among the “bigger” movies this summer from Marvel and others.

Q – What about your next project?

LW – I’m probably not allowed to talk about it; but it is “kind of” a horror film. It appeals to me because as with “Upgrade,” I keep creative control. The more budget there is, the more you can lose it, unless you are Spielberg or Nolan. I am not willing to give up creative control and will stay here.