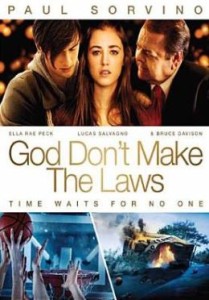 A stranger comes to the small village of Rockwell where time has stood still for the last 17 years.  No one ages.  No one gets sick.  No one dies…until now.  Half of the town is scared of change and of getting old; while the other half of the town wants  to move on with their lives.

Hawk Kodiak is as mysterious as his past.  He has no history or past and doesn’t know where he came from.  Warden Bud Kelly calls on a favor with Basketball coach Eddie Palmer to give the boy a second chance at life.  As Hawk tries to integrate with the town folk, their fears become too strong and his life becomes in danger.  When one of the town’s cheerleaders catches a cold and slips into a coma, the fear is all too real.  Can this town finally move past its very sorrowful past or will they continue to stay in their secluded town?

This is a very good story about life, both good and bad.  It’s about sorrow and love, loss and wins, and accepting and moving on.  The cast is perfect and the story is engaging from start to finish.  It has a very “Twilight Zone” feel to it without it being a dark story.

Although the main story is told in flashback, it is well done.  The only open questions are about who the men in suits really are.  What is Lewis’ role?  But it isn’t enough to detract from this well done story.

This is a great story for fans of “Twilight Zone” (even though it isn’t an episode) and a wonderful story about life and moving on.  With bits of “Footloose” and “Twilight Zone” mixed together, I think this film will be a hit with several factions.  Nice job!